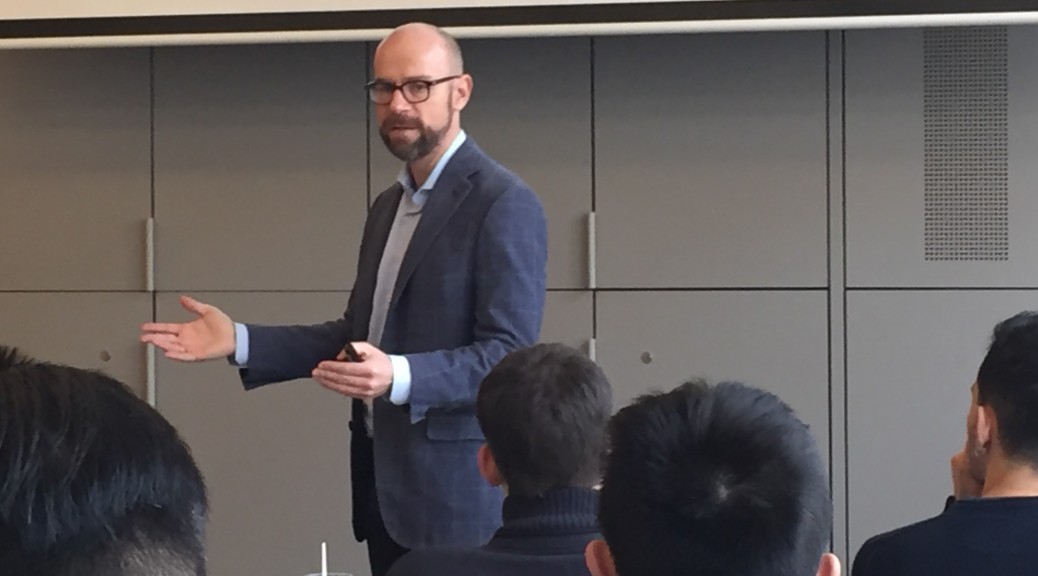 Timo Becker
Master of Finance Class of 2017
Timo Becker is a Frankfurt School Graduate and holds a M.Sc. in Finance. He joined LBBWs Financial Markets division in October 2018 as Graduate Trainee and will be permanently based in their Singapore Branch from November 2019 onwards.”

Last Saturday we had the great pleasure to listen to a very well-known practitioner of the M&A industry. Dr. Eric Fellhauer (Co-CEO of Lazard Germany) has 21 years of work experience within Corporate Finance and Private Equity. Dr. Fellhauer joined Lazard in 2003 after five years at Merrill Lynch and three years at Deutsche Morgan Greenfell.

Lazard is an independent advisor with more than 165 years experience in the industry. The company has two main divisions which are Corporate Finance Advisory and Asset Management. Therefore, the networking opportunities for the students with the concentrations Capital Markets and Risk Management as well as for the students taking the Corporate Finance and Financial Accounting & Advisory concentrations were really unique.

First of all, Dr. Fellhauer told us something about the current on goings in the industry. For example, he told us that M&A has become an extremely global business. Nowadays, for instance it is very important to have offices and employees in the Asian countries in order to serve the big number of cross-border activities particularly with Chinese clients.

The lecture was divided in two parts. In the first 90 minutes Dr. Fellhauer spoke about basic M&A practices. The second part was about case studies and real deals which have taken place in the past.

In the first part Dr. Fellhauer told us a lot about the background activities within an M&A deal. We learned about the different stages within an M&A deal as well as about project timetables and the number of employees involved. We also got a feeling about the number of bidders involved from start to finish in an M&A deal which was surprisingly for most of us. Besides the M&A business Dr. Fellhauer also spoke about ECM activities such as IPOs. Particularly the insights in roadshows were very interesting for all of us.

The second part of the lecture was case study driven and therefore much more technical which was very valuable as well. First of all, we discussed the main differences between DCF and multiple valuation approaches which are usually popular interview questions in most of the investment banking divisions. Afterwards we talked about the advantages and disadvantages of both methods. An interesting conversation came up regarding different multiple approaches.

“When is it useful to use an EBITDA rather than an EBIT multiple?”

“Why are multiples increasing during crisis?”

…were typical questions in this context.

Subsequently we talked about current trends in the European and German M&A markets as well as about the latest developments. Personally, the highlights of the discussion were the insights into the intercultural differences which has to be conquered during cross-border activities. In particular Dr. Fellhauer spoke about the experiences which he has made during negotiations with Chinese, Japanese and Indian buyers. A big risk with Chinese companies for example is that they are focusing on technological acquisitions. However, a deal at the end may collapse as the Chinese government has to give its final approval. The Japanese counterparts on the other hand are looking for a 100 % fit. It takes usually a while until they give their offer but than they are definitely reliable. The following discussions about the legal environments, for example during a squeeze-out which were followed by an introduction to governmental interventions during a merger process were also highly valuable for us.

In bottom line the guest lecture was an outstanding chance to gain unique experiences from a very well-known practitioner with 22 years work experience in the industry. Once more it gave a proof how well Frankfurt School of Finance & Management is integrated into the Finance industry. Academic excellence and practical experience along with unique networking opportunities in my opinion makes Frankfurt School second-to-none to obtain my Master of Finance degree.