Developing the dartboard of the future with Frankfurt School and Entrepreneurs of Tomorrow
FS Life / 24 July, 2017 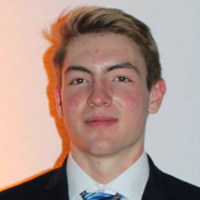 One day a mysterious man appeared in our English class. His name was Dennis Phillips. He came to proclaim the soon starting Entrepreneurs of Tomorrow project. This was the first time we have ever heard about the EoT competition. The objective of the contest was to write a business plan about a very own business idea which the participants have to come up with. Mr. Phillips told us that there would be five presentations about business plan material followed by a lesson of mentoring with people from the American-German Business Club being experts in the field of business. Furthermore, he said that in between the meetings there would be a break with free food. This was the point where we became excited and decided to participate.

The first meeting was in September of the past year at Frankfurt School of Finance & Management. We were quite excited though we had no clue what our business idea was. But we enjoyed the food during the break. We went to all of the other meetings and learned a lot about writing a business plan and the process of structuring a business.

Award Ceremony of the “Entrepreneurs of Tomorrow” business plan competition organized by the American-German Business Club and hosted by Frankfurt School of Finance & Management.

THE idea was still not developed, but we came up with some small ideas that we presented to the mentors during the second half of the meetings. Unfortunately, they were all more or less horrible, and the mentors crushed our dreams. However, this was very helpful as we learned that failure is a major part of business.

After the meetings with a lot of good food had come to an end, we realized that it was about time to come up with a real idea to write our business plan about. During the Easter break of school, we were enlightened. Since some of our team members were more or less passionate dart players, we decided to combine the two standard variations of dart boards, an electronic dartboard and a traditional dartboard made of sisal.

Our product would count the points for the players automatically while they can still play on a real sisal dartboard. Immediately, the five of us got together and started writing based on our idea. We handed in our plan, too late of course. We did not think that we would have a big chance at all. But one day, we received an email that we were among the top 5 and should present at the awards ceremony. The excitement overcame us, and we were delighted to have the opportunity to present our idea. Eagerly we prepared a presentation and took the time to practice in school as well as at home.

Despite the good preparation, we were enormously nervous when arriving at Frankfurt School. After having a lot of fun during our presentation and hearing the other presentations, we still did not think that we would have any chance.

After a break (again with food) where the jury discussed who the winner was, the Consul General of the United States gave a talk and announced the winners. We were already excited when there was a tie for the fourth and fifth place which we didn´t belong to – implying that we were among the “top 3”. But after we were not number three and the second position was announced, which we weren’t either, we freaked out. After running to the stage and receiving the certificate we had the chance to talk to some of the jurors and the Consul General. We also received an offer to produce a prototype which we gladly accepted and are now trying to develop.

Award Ceremony of the “Entrepreneurs of Tomorrow” business plan competition organized by the American-German Business Club and hosted by Frankfurt School of Finance & Management.

During the project, we learned a lot. Not only did we figure out how to write a good Business plan, but also improved our Business English, as the events were fully held in English. All over, the program strengthened our team spirit and was always a lot of fun.