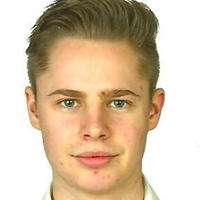 Maximilian Ludwig
MoF class of 2017
Max is a Master of Finance student in his last year. Until recently he was working for the PrivateFinancePartners but decided to leave the company in order to start working in M&A for William Blair next month.”

After high school I decided to start a Bachelor at the International School of Management (ISM) in Munich. Despite the fact of having a lot of fun during my studies, when I finished my degree I was somehow feeling that there is so much more to learn. Therefore, I decided to look for an adequate university to start a Master’s degree. After some online research and looking at public rankings, I submitted my application for the Frankfurt School and only a few months later, a new chapter of my life was already about to start.

Although the ISM and the Frankfurt School both have a similar system, on my first day I had already realized that this time my studies will be completely different. When I arrived at university, I was super surprised to see the variety of nationalities of all the people. When you think about it, it is somehow amazing! Every time I had to do a group case study at FS or even when I go to a party, I do it with friends from all over the world – at the ISM it was rare to find someone who was not from Munich itself.

But anyway, as I have already mentioned, the reason I made the decision to do a Master’s was because I felt I still needed to extend my knowledge. Obviously, I could have just stayed in Munich, and I assume I would be really satisfied with that program too, however it was time for something new – it was time for FS.

So, was it the right choice? Now, as I have already finished three out of four semesters, I can say “yes it was!”

Frankfurt School’s reputation did not only help me to find a good job, but more importantly, I can finally say that I really know something. The wide range and variety of modules and concentrations  really enable me to obtain thorough knowledge in my chosen courses. I can only assume it would be the same for your personal choice too!

But to be honest, when it comes to business it is essential to know the different methods and models, which I am sure are covered in every Master’s programme. So… what actually is the difference at FS? Well, FS is much more than only interesting and high quality courses. For example, the university incentivizes its Master’s students to participate in several business games at other universities, competing against other business school students.
This year, some of the students will be heading to the HEC Business Game in Paris, where last year Frankfurt School won and several team members earnt summer internships at the respective companies. I don´t know about you, but I have to admit, without FS I would not even know that such a challenge exists.

Anyway, let´s get back to the studies at FS itself.  For me the biggest reason why I chose FS in the first place, was its unique “3-Day Model” which means you can work part- time for three days a week, during your full-time Master’s program. This is awesome as you can gain practical experience, earn some extra money and finish a full-time Master’s degree all at the same time. I don’t know of another university that gives you this opportunity!

I guess I should come to an end now although I could probably fill some more pages about my experience as a Master’s student and life at FS in general, but no one would read such a long blog post anyway.

I therefore only can tell you that if you are interested in starting a Master’s, take a look at Frankfurt School and try your best throughout your time there.  Maybe one of the students in this year’s intake will be you!