Increase your career opportunities in Germany by learning the language at FS
Full-time MBA / 8. März 2018 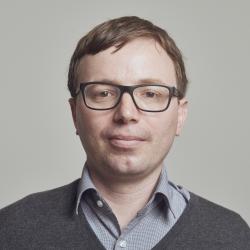 Dominique Francis Dare
Full-time MBA Class of 2018
Dominique is currently studying in the full-time MBA programme at Frankfurt School. Before entering FS, he worked with State Street in client services, while accomplishing his goal of becoming CFA charterholder.

One of the reasons that I signed up for the MBA here was the opportunity to increase my level of German. Since my goal is to stay in Frankfurt after I have finished my studies, it is important to reach a relatively high level of German quickly to be able to achieve this. The biggest problem that I face in trying to learn German is that I only speak English fluently. What I mean is that the concept of learning a foreign language seems incredibly daunting for me. I have always been envious of people who could speak multiple languages fluently. It’s not so much about better job opportunities (but that is pretty great), it is about travelling somewhere and being able to interact with people from around the world. Sure, I can get by in many countries speaking English, but I always feel like a lost tourist when I travel abroad. Even sometimes in Frankfurt, I always feel a bit self-conscious when someone asks me a question in German and I can only respond back with a confused look.

In the MBA programme, we are fortunate enough to get German courses (that are included in the overall tuition fee). Our teacher is amazing, and I have learned a lot, but I felt like I should do more on my own to complement her classes. I just wasn’t sure how to proceed. Whenever I face a problem like this, there’s only one thing I can do – learn from someone more knowledgeable than I am, so I bought a book teaching a general method for learning a foreign language. Their idea was to create a series of index cards that linked German words to pictures – instead of simply linking German words to English words. The concept seemed interesting to me. At the very least, this method was more interesting that memorizing a list of German words verbatim. In order to make the cards, I downloaded an app called Anki, which is designed to make and view them on my phone or computer. Next, I needed a plan on which words to learn. Of course, I knew I must learn der, die, das – ich, du… – haben, sein and so on. After these words, it’s not incredibly obvious where I should go next. As a result, I bought a frequency dictionary which sorts the words by the frequency in which they are used instead of alphabetically. Naturally the first words in the dictionary are der, die, das and the dictionary goes on from there.

The frequency dictionary is a great way to start but I still needed to translate the words into pictures. From here, I used Google Images to find a picture describing the word. While finding any picture is good, it’s better for me to use a picture that I can personally connect with. So, when I created the card der Bruder, I used a picture of my brother. By making the card relevant to me, it’s far easier to remember the word. Naturally, I don’t have a connection that strong to every word in the dictionary.  Still, I can make a connection by using a TV show that I have watched, like the Simpsons or Mad Men, to make the word easier to remember. So when my parents complained that I was watching too much television when I was younger – little did they know that I was actually preparing to learn German.

I can even take things one step further. As an English speaker, the idea of having a gender for each noun made my life difficult. With my index cards, I could now remove this obstacle. To remember der Ball, I have a picture of Messi and a football. My card for die Polizei has a picture of Marge Simpson as a police officer. For a word like das Flugzeug, there are no men or women in the picture, so thus the word is neutral. For verbs, since they are meant to convey action, I attach a gif file to the card. This would contrast with nouns, which I only use a picture. When I have a card for a word like laufen, it’s more useful to have a small video clip of someone walking rather than a picture. On the card, I would also have the conjugated version of the verb, both in the present and past tense. With all my cards, I also go online and save an audio file with a native speaker saying the word – so I don’t horribly mispronounce any words I learn (although it still happens from time to time). Learning single words is great, but learning grammar is by far the hardest aspect of any language. Luckily, I can still apply the same concept – I bought a grammar book and then take some of the examples, make a card with a picture, and simply leave the important word out. For example, I made a card that has the phrase – Ich kaufe ___ Fernseher on the front (with a picture) with the back of the card showing Ich kaufe den Fernseher.

The great thing about the Anki is that it also sets up a schedule to review all my words. As important as it is to know die Frau, it’s a pretty easy word to remember. If I were to review this every single day, or even 3-4 times a week, it would be extremely boring on my side. When I create a card, I get tested twice on the same day. When I answer it correctly both times, I have to answer it only once the next day. If I remember the word the next day, then I have to remember it in two days. After two days, I get asked about the word in five days, with the interval growing longer as I answer the word correctly. If I get the word wrong at any point, I must start everything over again. In this way, most of my time is spent either on new words or words that I have trouble remembering. Using this method, my vocabulary has grown tremendously in a few months – I’ve made over 3,000 cards now. It’s actually even a little bit fun to try and think of a connection for each word that I encounter in the dictionary. When I started, my German was quite bad, I knew some words that I heard but little else. Now I’m at a B1 level, so I’m still far from fluent, but I have made good progress over the last few months. Now when someone speaks to me in Frankfurt, I don’t always look so confused – only sometimes. It’s a start anyway.