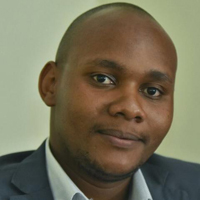 Samuel Kanyi
MoF class of 2019
Sam is in our Master of Finance class and participated in the CFA Challenge 2016/2017.

Every aspiring finance professional acknowledges the prestige gained by participating in the CFA Research challenge. Providing students with an avenue to hone their valuation skills, it is a competition that entails preparing and presenting a research report on a listed company, carrying out a fundamental analysis on it and issuing a recommendation on its stock, basing their opinion on information both publicly available and provided by the subject company.

This year, the German Chapter of the Challenge entailed yet another fantastic European company, ProSiebenSat1.Group, an aspiring European media giant.

After the team selection was carried out, we were invited for a conference call, where the timetable, rules and regulations were explained. Despite some hiccups, by mid-October, we hit the ground running, divided our tasks and set out to fill the previous year’s team’s shoes.

“Being new to Europe, it was an especially exciting task to understand the workings of the European media industry, the Stock Exchange, and other salient aspects such as the Corporate Governance Code. What’s amazing was the fact that Pro-Sieben would comfortably hold the top ranks of our local stock index, despite being among the smaller entities in Germany. Faced with roughly six hundred pages of annual and quarterly reports, it was it was an arduous task to learn about the workings of the company, its financial performance, future prospects and more so to summarize it into a coherent 10 page report. “

During the company visit, which was held at the Bloomberg Offices, we had our first encounter with the Company officials, and most importantly, our competitors. Each armed with a set of questions aimed at the Investor Relations Manager; we embarked on interrogating Pro-Sieben’s growth prospects and strategy, which pointed to an illustrious future. Despite this, a desktop look at the market would convey a contrasting opinion, and we were at pains to understand why the prices were not reflective of the seemingly well thought out strategy. This was in line with its recent capital raise, which was not well received by the market. Only after we delved into the implications and nuances of its strategy did we begin to understand that not all positive news is “good“ news.

Fast forward to a month later, exams were looming, and with our teammates sitting the CFA exams, we took some time off for individual analysis and agreed to regroup upon completing our individual segments. But, the best laid plans are of mice and men oft go awry, and by the 27th of December, we were on some mild panic mode, working tirelessly to articulate the valuation model and complete our individual parts. Indeed, we needed to get this over the line and the January 9 deadline was fast approaching.

At the turn of the year, the report began to take shape. The Valuation Model hinted at a “Buy”, and luckily, the market sentiments were beginning to warm up towards the company, lending us some sense of hope regarding the quality of our work. The general outline and layout were ready, and all we had to do was plug in our parts, and make sure the document flowed comprehensively. This sounded easy until we found out that we had some slight gaps in our task allocation, which meant we would have to cover other roles with just days to go.

And oh, did we work, occasionally missing the last train to include feedback from our mentors, who all intimated that we had left it rather late. Unavoidably, but sometimes I liked to think we are the embodiment of working well under pressure: we all understood what we needed to do and worked like a well-oiled machine to get over the line. Then came the formatting, where I had to sit back and watch the masters at work, their attention to detail leaving me in awe. Tables, alignments, font sizes, grammar, colours and chart formats all had to be uniform and professionally done.  Once a readable draft was ready, it read like a story.  We then embarked on a review of the document, which led to a host of changes with just hours to the submission date!

So there we were, in the dungeons on the evening of the 9th of January, reviewing every dot and cross to ensure everything was perfect. With exactly ten minutes to the end of the deadline, we sent the report and the relief was palpable once we had submitted. This transitioned into a month long waiting period.

We still had to make the presentation to our university mentor to earn our grade, and with this target in our sight, we met up again to further summarize our ten page report into a ten minute presentation. We also coincidentally chose the day after the announcement date to deliver our presentation.

The team could hardly keep calm, and we would check our phones periodically; constantly refreshing to check whether we had advanced to the final. When the CFA Germany team informed us that they had to postpone the announcement, we were thrust into a mix of relief and shock, wondering what could have caused the delay.

Now, to the events of the next day: the presentation.  With so much to say about Pro-Sieben, it was almost disheartening that we would have to cut down on all the information we had gathered about this interesting company. As we worked on the presentation, the good news chimed in on my phone! Sven and I were very excited and almost caused a scene in the library. We had been selected to the finals! But we still had to deliver the presentation to our academic panel. Upon finishing the presentation and answering the questions, we invited our mentors for comments. Our mouths almost dropped when Dr. Knobbe and Prof Zeng unilaterally suggested that we would have to surgically cut down more of the parts.  Luckily, the champagne we had cracked softened the blow quite well…

Back to the drawing board!

We took apart the presentation and realized that we would have to be really good to package all the information into ten minutes. This necessitated a raft of rehearsals to ensure we had the contents of the report on our fingertips. Despite the team members being committed at work, we managed to hold another rehearsal with Prof. Zeng and Heiko, (our Industry mentor) with just days to the final. They wished us the best of luck, and we set out to maintain the school’s increasingly impressive record in the challenge.

After a working valentine’s day, we sent in the presentation to the CFA society and embarked on the final preparations. Everyone had roughly two minutes under the spotlight, and the contents of our individual parts would likely be repeated in our minds several times over the next two days. We held our final rehearsal on Thursday evening, and sat back to reacquaint ourselves with the valuation model, report and answer anticipated questions.

On a rainy Friday morning, we met up at the Bloomberg office, and the team from RWTH Aachen filed in soon after. We would be first on the stage, and having arrived 45 minutes earlier, you could have cut the tension with a knife. The gentlemen wore Frankfurt School ties, and with Christina, Prof. Zeng and Dr. Knobbe sporting the Frankfurt School scarves, we looked resplendent, ready to win.

Fast forward to the presentation, everyone presented their part seamlessly and we could see the nods from the panel and were sure that we had delivered a good report. We then answered the panel’s challenging questions expertly and confidently. From the crowd, we could see Heiko, Eva and Victoria urging us on and within twenty minutes, we were done. The six months of analysis had finally culminated in ten minutes of presenting and ten more of Q&A.

Afterwards, the team from Aachen were ushered onto the stage for their presentation. As the Technical University Munich team had been delayed, we waited till after midday for their arrival and delive
ry, after which we broke for lunch. Thereafter, we held a feedback session with the judges, and based on their very positive comments, we were certain of winning twice in a row. Sadly, this was not to be, with RWTH Aachen taking the crown to represent Germany in the EMEA Final. After a photo-op, we filed out of the room, disappointed that we would not be going to Prague, but extremely proud of ourselves for getting to the German finals.

We give our regards to the Aachen and wish them the very best in the challenge. It was certainly an honour to participate in the challenge and to gain valuable insights into equity research.

Sven Herrmann, “Participating in the CFA Institute Research Challenge was an interesting experience and a great opportunity to foster my professional and personal development. It’s been a huge learning curve and working in a team of enthusiastic students was very rewarding.”

Chris, „The CFA Research Challenge was a challenging opportunity to demonstrate teamwork and mental endurance. It was interesting and insightful to conduct such a thorough analysis of a well-known German company. To sum up the experience, I am positive that the concepts I gained will be directly applicable in my studies and thereafter.“

Christina: „I’ve experienced how the best teamwork came from students with very diverse professional backgrounds who complement each other very well, working towards one unified goal.“