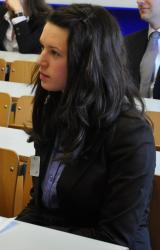 Sarah Scholl
MiM class of 2016
Sarah is a MiM Student with a focus on Strategy & Organisation. She spent her semester abroad in Uppsala.

Not quite what happened to me but in the beginning of this year, besides this song, my friends and family only knew Uppsala as what people would say when they just tripped on the uneven ground or said “bless you” once they heard it. Now, five months later, they should know better…

I am currently spending my exchange semester in a beautiful city in the middle of Sweden called Uppsala, at the country’s oldest university. It is mid-May now, spring started with amazing weather (yes, that’s possible in Sweden), which also means that my last month here just began – time to reflect some decisions:

After I completed my Bachelor degree in Mannheim, I decided to continue my studies at Frankfurt School with the Master in Management (MiM). Important decision criteria for me were the possibilities to choose the concentration „Strategy and Organization“, to work besides studying and last but not least to spend the final semester of the Master’s program abroad.

I always had a high affinity to Scandinavia, especially to Sweden: an internship in Skåne (Southern Sweden), my first semester abroad in Örebro during the Bachelor studies, and various vacations in Sweden. This enabled me to learn about the people, culture, and language and I knew I wanted to come back and see more of this fascinating country. Thus, the decision where to spend my semester abroad was very easy for me. However, many people asked me why I decided to go abroad instead of doing my final semester at Frankfurt School and especially why, if I wanted to go abroad, I again chose Sweden instead of exploring something new.

First, I think studying abroad in general is not only important as international experiences are generally requested in today’s business surrounding but it also gives a great opportunity to strengthen one’s English skills, maybe even learn a new language, discover and understand new cultures, gain different perspectives on your own life back home, learn to work in diverse teams, get new and various views on academic knowledge, and – maybe most important – experience a memorable time that makes one grow personally in a way nothing else could. Even if the home university offers great courses, these advantages of studying abroad would always make me choose this option.

Second, I chose studying in Sweden at Uppsala University for various reasons. Uppsala University is the oldest and most traditional university in Sweden, which gave me the chance to experience many old student traditions like student nations, gasques and of course the best event of the year, Valborg. In addition of being known for the great student life, Uppsala University is known as a prestigious university in Sweden, where also many Swedish students aim to study. The studies themselves are in English, which allows focusing on the studies itself and not having problems understanding topics based on language difficulties. Furthermore, Uppsala University is a partner university of Frankfurt School. This allowed me on the one hand a much easier organization of the stay but I also liked the idea of using and strengthening the partner network by representing the Frankfurt School in Uppsala. In addition to that, I choose to go back to Sweden as I started studying Swedish during my first semester abroad and could now improve my knowledge to be able to eventually speak Swedish – och det funkar ganska bra. I also wanted to reconnect to my Sweden-network I established during various stays in the country. And finally, even though I was in Sweden before, there was still so much more to explore: Crossing the Polar Circle on the way to go dogsledding in Kiruna and learn more about the Sami people in Lappland, taking a Sunday walk on a frozen lake, experiencing the three day festival around Valborg in Uppsala (which is the place to be during this time), enjoying a ferry ride through Stockholms Archipelagoes (nearly 30,000 islands, islets and rocks), partying in the historic nation buildings, attending traditional “gasques”, or studying at Carolina Rediviva, the oldest and biggest library in Sweden, located in Uppsala, were only some of the highlights I have not seen before.

As exchange student I attended the normal Master track with all the other Swedish students and had to take all the courses. The courses, all focused on management in a global society, were very academic and thus offered a great complement to my rather practical business school studies at Frankfurt School. Some courses (entrepreneurship and consulting, communication & change) still offered a connection to Swedish businesses, thus not only learning about Swedish companies in theory but actually having the chance talking to them and establishing connections. Due to Uppsala’s proximity to Stockholm we had the chance to visit various consultancies and industry companies in their Nordic headquarters. For those wondering, the level of studies was similar to my studies back home, however, much more academic focused on literature and research. Reading many papers and writing own research reports is a massive workload but gives a perfect preparation opportunity for the Master’s thesis that I will have to write in the upcoming months. Additionally, Uppsala University offered Basic Swedish courses for three levels from beginners to advanced speakers, which enabled me to further develop my Swedish knowledge.

Many people ask me about life in Sweden and I have to say that it is in many parts exactly how one pictures it: Winter is dark, cold, and long but spring and summer are often beautiful, my student apartment was in a red, wooden house, Köttbullar for lunch and Kanelbullar for “fika” (a social institution in Sweden, which can take part multiple times a day, where one takes a break from working or studying, has a coffee and some pastries together with friends, family or colleagues) were quite common, many Swedes are actually blond, beautiful, and extremely polite and helpful, IKEA and H&M can be found everywhere and for the latter often multiple times in one city, alcohol can only be bought at a liquor store called “Systembolaget”, and life in general is ve
ry expensive. But there is one Swedish word, maybe the most popular one, being used to describe anything in Sweden (country, people, things, situations, moods, etc.) – “lagom”.  It perfectly fits to the Swedish mentality of preferring the good average and means that something is “not too big, not too small”, “not too much, not too little”, simply “just about right”. This is just what I love; Sweden feels “lagom” for me – just about right. So I will definitely come back to visit or maybe even to work – my “nordic adventure” is not over yet.

To finally answer the question, one gets always asked at the end of ones studies abroad and the end of ones studies in general: “Do you regret any decision, the one joining Frankfurt School for your Master studies or the one going to Sweden and Uppsala University for a semester abroad?” I can say that no, I would do exactly the same if I could go back and choose again and can thus recommend both decisions! I think the experiences I made in Frankfurt and Uppsala perfectly complement each other and are for me personally the ideal base for both my professional as well as private future in Frankfurt, in Sweden or anywhere else in the world. Tack för allt!