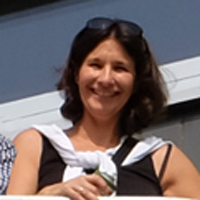 As new students move into the FS Dorms, the South façade of Haus A (facing Adickesallee) gets a fresh look. The former court building has been renovated in 2014 and provides 111 rooms for students grouped in 15 flats.

Thomas Messerschmidt and Markus Janista aka Canister from Oberursel started working last week. The graffiti artist uses one of the five patterns, which will be found throughout the New Campus. Haus A is the ‘biggest canvas’ he has been working on so far.

Trees will be arranged in five groups representing the five continents in the large open area on the New Campus. The project team carefully selected the trees together with the landscape architects – planting on the New Campus will start in early 2017. PIBO Creative picked up the theme of the continents and developed five patterns for the ‘United Forest’ at Frankfurt School. The Finnish artist Pinja Metsäkoivu designed unique patterns representing the continents and their flora. Each continent will be assigned to one of the five towers and will enhance identification and orientation within the new building. The project team worked closely with the artist and organized workshops to further develop the patterns and select locations, where they will be applied. Recently a 1:1 sample area has been installed on site and has been approved by the committee. Final details are being worked out with the interior architects and suppliers. We are looking forward to present all five patterns next year.