From the Great Wall to the Tallest Building in China
Master of International Business / 17 November, 2014 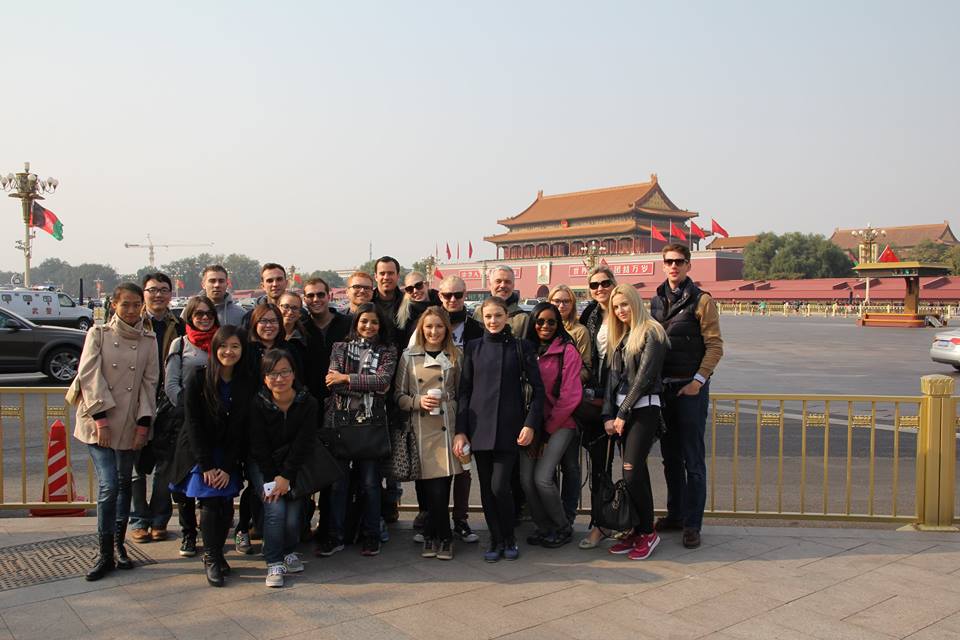 Ni Hao,
The Master of International Business (MIB) at Frankfurt School concentrates its third semester on a regional specialisation. All students select one of four regions to further study its business relations. The possible regions are Africa, Latin America, Europe and Asia. I graduated in Environmental Engineering in Brazil and began my master’s program at FS in 2013, so to create a more diverse educational background, I decided to study Asia Business Relations. Traveling to China for two weeks with your classmates is a great part of the MIB program.

The group left Frankfurt on October 25th. After a nine hour flight, the plane landed at Beijing International Airport, which was designed for the Olympic games in 2008. The enormous size of the airport, mostly painted in red, gives the passengers a sense of greatness. On the way from the airport to the hotel, most of the students were impressed by the large amount of cars in the streets, great avenues and a mix of ancient and modern buildings.

Frankfurt School had previously organised the schedule for the week in Beijing. The main touristic points, together with company visits and lectures at a partner university were included in the “to do” list. Beijing is definitely a city full of culture. It is necessary to be there for a longer period in order to truly explore what the city has to offer. The hotel was located in a walking distance from the Tiananmen Square, where the entrance of the Forbidden City, National Museum of China, the Mausoleum of Mao Zedong and the Great Hall of the People are located. While walking from the hotel to the central square, I stumbled upon the China National Centre for the Performing Arts, which is located at the west side of the Tiananmen Square and the Great Hall of the People. Its unique titanium dome measures 46 meters high, 212 meters east -west direction and 144 meters in north – south direction. Such contemporary construction emphasises the strong contrast between modern and historical buildings in the same area of the city, a result of the rapid development taking place in China.

The combination of educational, professional and cultural activities created a singular experience in Beijing.  The entire MIB group attended two classes at the beautiful campus of the Beijing Normal University. The first presentation was held by a representative from the National Bureau of Statistics.  Among the several topics that were discussed, I was particularly more interested in understanding how factors such as the slow down of global economy, structural changes and over-capacity, had influenced the Chinese GDP growth rate, which has been declining since 2010. The second presentation, “Understanding Business is China” provided a general overview about the Chinese society and the main challenges concerning the Chinese economy, renewable energy and the real estate market. What impressed me the most was the importance of old traditions and the need for strengthening personal relationships in order to establish successful business relations. On the very next day, we had our first company visit at China Credit Trust, where we saw a presentation concerning real state market in China. Furthermore, by the behaviour of the spokesperson, who was in his early thirties and overemphasising the importance of making as much money as possible, we could see a “conflict of generations”, when compared to what we have learned on the previous day about Chinese values and traditions.

The Great Wall of China

With our remaining days in Beijing, we visited the 798 Art District, the Great Wall of China and the Summer Palace. All of them were strongly recommended by magazines and friends. The Art District is comprised of several art galleries, restaurants and small shops, where people can buy accessories, souvenirs, paintings, pictures, and other pieces of art. The Great Wall represents a unique historical legacy from the Chinese Empire. Its greatness impresses people from all ages and different nationalities. We visited the Great Wall on a foggy morning, but the gray sky could not diminish the magic of the construction. Being on the top of the wall after climbing an endless stair for more than one hour, created unique feeling of accomplishment. The Summer Palace is another legacy of the Empire, is located in the surroundings of Beijing. Since 1998 it is included in the UNESCO World Heritage List. The palace is mostly known and appreciated by the combination of temples, bridges and halls with the natural lake landscape.

After six days in Beijing, our next stop was Wuxi, which is mostly unknown outside china, it was a great surprise for all of us. Wuxi is a “small” city of 6 million people, one hour by train from Shanghai, with a first class infrastructure and a warm atmosphere in the city center. Many bars, restaurants and stores next to each other in a long pedestrian area, right next to the river, exceeded the expectations of all MIB students. On the next day we visited an automotive supplier, named Hebang Company, which is a mid-size family owned business that provide automotive parts to very successful car manufacturers in China, such as Volkswagen, Hyundai and Daimler. On the last day we visited the Ling Shan Grand Buddha. More than 88 meters high, it is one of the largest Buddha statues in the world. It was the first time I had the opportunity to visit a place marked by the Buddhist culture. I am looking forward to returning to Asia and further exploring new places.

Our last destination was Shanghai, the Asian city of lights. On the first day, we attended a lecture at the Shanghai University of Finance and Economics. The presentation, “Doing Business in Shanghai”, initially provided a historical overview of the city, stating its strategic geographic location in the delta of the Yang Tse, the longest river in Asia. Shanghai has become the Financial Center of China. It is a city for new business development, young entrepreneurs and a strong international influence. When compared to Beijing, the differences are clear, Shanghai stands for modernity and innovation.

The company visit organised by Frankfurt School was at Shanghai Huf Automotive Lock. Huf is a German company located in 14 countries worldwide. The company develops mechanical and electronic key systems for many car manufacturers, among them Volkswagen, Audi, Chevrolet, Fiat and SsangYong. It was very interesting to compare the differences between two mid-size companies, Huf in Shanghai, and Hebang in Wuxi, although the German one is considerably bigger and has a much longer history.

Three evenings in a row, I went to see the floodlit Skyscrapers from the “Bund”, where you have the most beautiful view of the buildings, the Shanghai World Financial Center (commonly known as the bottle opener), Jin Mao Tower, Oriental Pearl Tower and the Shanghai Tower, currently under construction and the tallest building in China. It is easy to loose the track of time, while you are looking at such an impressive view full of unique buildings. When the lights are turned off punctually at 10pm, you still have the colourful image in your mind. To leave Shanghai, in great style, there could be no other way then taking the fastest train in the world. The Shanghai Maglev Train is the first commercially operated high speed maglev train. It was designed in a joint venture between Siemens and ThyssenKrupp in Kassel. In partnership with the German Government, the technology was implemented to connect the Shanghai Metro to the Shanghai Pudong International Airport. The train reaches 431 Km/h and the journey takes less than eight minutes.

Shanghai – View from the “Bund”

After visiting Beijing, Wuxi and Shanghai, I left China with a great impression. Each city has a unique characteristic, from the bricks of the great wall to the observatory in the Shanghai World Financial Centre, the MIB students covered thousand of years of history, better understood the factors which led to China’s rapid economic growth and could see with their own eyes the development that is taking place in the next world super power.

Finally, I would like to thank Carlos Weishäupl and Raphael Leibold for providing the pictures I posted together with this article; and Mr. Ingolf Jungmann, Vice President and Managing Director of Frankfurt School, who represented FS throughout the entire trip and has become a great friend of all MIB students.
Xie xiе