From the shores of the Main to the Copacabana
Career Services / 7 November, 2018 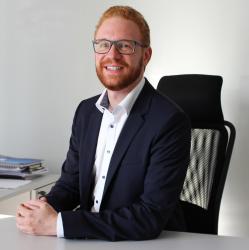 Andreas Montag
Head of Corporate Affairs
Andreas Montag is currently seconded from Fraport AG to its wholly owned subsidiary Fraport Brasil S.A. Aeroporto de Porto Alegre in Brasil. He has graduated with Master Degrees in Finance and International Business from the Universities in Cologne and Helsinki.

Well to be honest I did not end up at the vibrant Beaches of Rio de Janeiro, but certainly in Brazil. To be exact Porto Alegre, the capital of the southernmost State, Rio Grande do Sul. How did I get here? Well first things first. My name is Andy, 32 years old, born and raised in Duesseldorf Germany. Since early on in my life I had a thing for travelling and foreign cultures. That’s why I ended up spending a good deal of my educational career abroad, namely the USA, Brazil and Finland. At the end I graduated with a Double Master’s Degree in Finance, as well as International Business.

My already mentioned love for travelling has left me early on with the wish to work for either an airport or an airline company. To be honest at first I was a bit reluctant about the airport as an employee as I was not sure that the international flair of 100s of different destinations for passengers would also be reflected in the day to day work. This “international flair” however, was one of the higher priorities on my list for the first employment after university. Looking into the Fraport Trainee Program it quickly became apparent to me that such worries were not necessary after all.

I very quickly realized that Fraport is much more than the Airport of Frankfurt. And trust me this airport itself is an operation so fascinating that is difficult to be found elsewhere. But the roughly 20.000 employees of Fraport handle much more than the passengers and freight of our home base. Fraport is an investor and consultant which currently is involved in the operation of 30 airports worldwide. Such involvements range from wholly owned subsidiaries to minority stakes in airport concession companies with local or international partners for small touristic airports such as Corfu in Greece up to large scale hubs such as Delhi in India.

In the end the decision to join the Fraport Trainee Program was easy. And as of today, I can say that I would do it again and again. At the time, I already considered myself to be quite a fan of airports. However, I quickly realized how little I knew about the operation of a European Mega Hub. My fellow Trainees still joke that the first 6 weeks of our Program felt like a BBC documentary. We actively participated in the daily operations and were able to look in every single corner of our airport, from Check-In over the Runways to the Baggage Handling System and the Air Traffic Control Tower. At the same time, we engaged in discussions with all relevant administrative departments to get a first grasp of the scope of our daily business. As diverse as the experiences in this program was also the composure of our “class”. We were representing departments such as Terminal Operations, IT, HR, Security, Real Estate, Infrastructure and Parking Management as well as Global Acquisitions. The Program laid the basis for a broad understanding of the entire company and facilitated the creation of a network that has been ever growing.

Take Off: Global Management and Acquisitions

The Trainee Program ended after three projects in different areas, including one abroad. Afterwards we joined our designated departments, in my case Global Management & Acquisitions. Here existing subsidiaries are being managed and new acquisitions prepared and executed. A smaller part also acts as consultant to other airport operators. The range of projects is broad, as Fraport is able to offer expertise in literally the entire airport value chain. My first projects were mostly related to the consulting and took me from Brazil over Norway and Uganda to New Zeeland. Due to my university background (and language skills) however, I got quickly drawn into the M&A activities working, first on the set up of a JV Consulting company and later the acquisition of two airport concessions in Brazil.

The work is challenging and often related to long hours, but it is also very exciting. To evaluate a concession project our teams have to look at and understand all aspects of an airport’s operation. Along come financing and legal aspects of M&A transactions always considering the different local realities and markets. Of course, we have specialists for the different areas and/or work with external consultants. Our flat hierarchy however allows project teams to be set up flexible, reacting to current needs. Everybody takes over responsibility from the beginning on and so I quickly became responsible for individual work streams and even the project management itself. Team work is a key aspect, as the work streams are always interrelated. I quickly learned to appreciate the communication and close cooperation with my colleagues as the best part of work. After all, projects become quite intense as deadlines are coming up or tenders are brought to an auction. During these times team spirit lets us pull through the sometimes strong emotions involved in winning or losing a project.