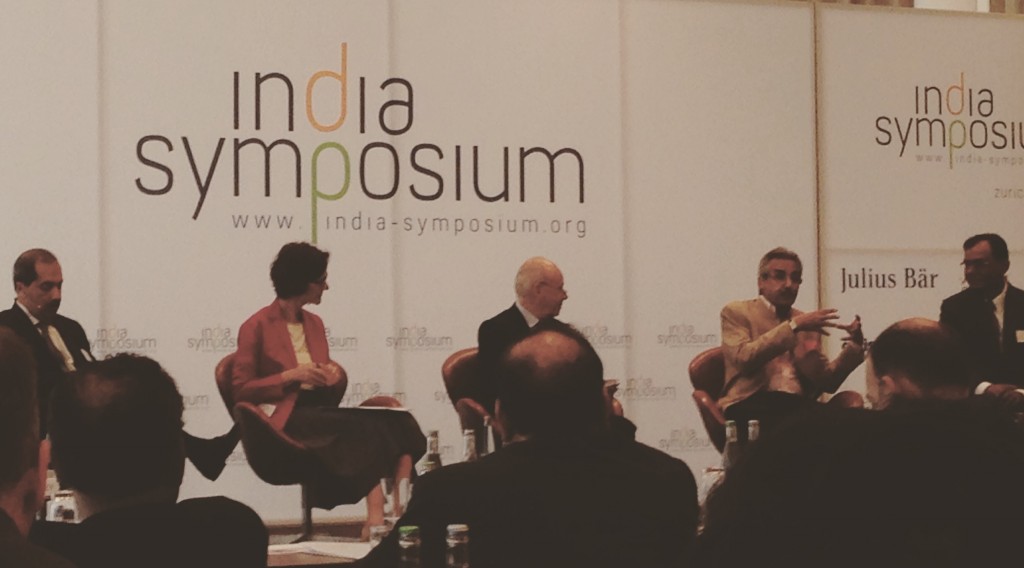 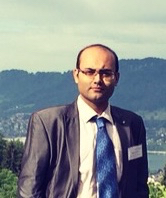 Subhayu Chakraborty
Master of Finance Class of 2016
Namaste! I am Subhayu and I come from India. I am an ex-transaction lawyer, who would love to 'count beans'. I love to travel, am a tech-buff, opera aficionado and passionate about innovation, wines and F1...and yes, an extreme coffee lover. I undergraduated in law from the WB NUJS, Kolkata.

On May 29, the India Symposium community organized the 10th India Symposium with the objective of facilitating  opportunities between India and Europe in the fields of business, politics, science and society.

Wait  — Sounds like another PR campaign from a country voted 142nd in the 2015 Ease of Doing Business rankings — Jim Rogers could hardly be blamed for shorting India, stating in 2007, “Much as I love India, I am not a fan of its government. Every year, they (Indian government) come up with more reasons for me to be less optimistic about that country.”  It should be noted that the World Bank Doing Business 2015 report and Jim Rogers’s article speaks of the economic realities covering a period when the Congress led United Progressive Alliance (UPA) was in power.

Monika Rühl, Chairwoman of the Executive Board of the Swiss Business Federation (economiesuisse) gave the special address laying down hard numbers while expecting bilateral trade to improve in the near future, praising the Modi governments commitment to reform and resumption of FTA discussions and signed off with optimism on signing an Indo-Swiss FTA by end of 2015.  India, in her words is a “key market for European and Swiss companies and open access to markets are key for Indian companies global aspirations”.

The symposium comprised of four sessions, which were:

For the first time since 1984, the BJP led National Democratic Alliance (NDA) has an absolute majority in the 545 seat Lok Sabha (lower house of the Indian parliament).  This would also be the first time that a party other than the long ruling ‘left of center’ Congress has been elected with parliamentary majority. The last years of the UPA rule had been impeded by policy paralysis caused by unstable coalitions, dual division of power at New Delhi and an indecisive bureaucracy bogged down by scandals.  A legacy of Indian parliamentary democracy has been a weak federation characterized by deadlocks between national and state governments (nor should it be completely done with, given India’s unique plurality).

First, there was 1991   — Post liberalization economic conditions in India improved and capital markets have become more developed. In the wake of a macroeconomic crisis, the then Congress government did away with some of the perceived imbalances wrought by the LPQ (License, Permit, Quota) regime; but left many sectors wanting for reforms. The focus of the last UPA government has been entitlement based welfare schemes, rather than reforms.

The present governments approach to economic reforms has been incremental.

In India, labor is the most important area crying out for reform. Government authorization, hitherto, is required to layoff workers in many cases and no reform perceived as weakening worker rights, have ever before gained traction. A legal regime where firms can write different forms of contract depending on their needs and lay-off workers, is much needed — at the same workers should be protected from being arbitrarily fired. Flexibility in labor market regulation can attract foreign capital, create jobs and unleash higher growth.

Yes, there is a reform agenda, but nothing, moves easily in India: given the devolution of power between New Delhi and the states —  the very fabric of Indian parliamentary democracy, given that the new government does not enjoy a majority in the Rajya Sabha (upper house of the Indian parliament).

Stability and certainty in tax policy being another major area of concern for foreign investors. Concerns about retrospective taxation (introduced by UPA in 2012 to cut down on fiscal deficit) and minimum alternate tax on investment funds raise negative vibes about the India story. Above all investors want certainty in tax regime. The much needed Goods and Services Tax Bill (expected to be implemented from 1 April 2016 once passed by the Rajya Sabha) has already been passed by the Lok Sabha and a select parliamentary panel will submit its recommendations next month will streamline the indirect taxation structure subsuming wide and disparate intra-state taxation regimes (pertaining to excise, service, entry and octroi) into a truly national market for goods and services, critical for Indian growth in the coming years.  A committee is also exploring the possibility of reducing corporate tax rates from the present 30 to 25 per-cent.

In a radical departure, for the first time states and union territories will be part of the central planning process. The government has done away with the Soviet style Planning Commissions ‘top-down one size fits all’ approach and replaced that with the NITI Aayog — a think-tank (National Institute for Transforming India commission), wherein states and union territories will also be represented in the strategy and technicalities of implementation.

In the words of Shri. Satya Sheel (MD, Metrovalley) ‘Make in India’ is an — “.. expression of commitment of the Modi Government to redefine Asia, through market perspectives”. Foreign investors bringing in their ‘best practices’ and being knowledge partners with Indian ventures will foster innovation, skill development and provide employment to score of Indians.  India is on course to be the second largest economy by 2050 (“The World in 2050“, PwC)  — driven by a buoyant workforce offering a greater potential to catch-up on growth, and consequently a burgeoning middle class offers a potential market that Europe cannot afford to not cash in.

What india needs desperately, is investment to bridge its infrastructure deficits and encourage strategic flow of capital.  Achievable — with liberal licenses, an investment inductive FDI regime along-with continuity of policy between the union and states, responsive and stable tax and flexible labor regime and transparent regulations.

Given the predicament the world economy currently faces with expected demand led growth to be dormant for the next few years, India should also focus on producing for the domestic market. This offers SMEs from Europe an environment to engage with India taking advantage of the Indian environment. It is going to be an uphill task and requires sustained and coordinated policy implementation — creating a strong sustained internal market, reduction in transaction costs of buying/selling goods and services and more importantly creating an efficient and ‘leakage free’ supply chain.

There has never been a better time, than today. Berlin and Delhi signed a bilateral mechanism in April 2015 to ease German investment and business in India. Chancellor Merkel is scheduled to visit Delhi in October, which is further expected to boost bilateral trade mechanisms and resume talks on an EU-India FTA.

Busy days ahead for the Indian beancounter!! After a 30-month lull cross-border investment is picking up spree, accentuated by the government’s move to raise FDI cap on certain sectors, like insurance and defence. India is at what is oft-quoted as the third-wave — a legitimate merger boom, where chief executives feel it is safe to do a deal and no longer be criticized. Indian corporates are looking to make more strategic acquisitions overseas, learning from poor-dealmaking of 2007-08, where for many corporates the raison d’être was empire building. For European companies looking to make acquisition in India, one important aspect is to realize that unlike the US the controlling shareholders in Indian companies prefer having ‘more skin in he game’ — ownership and control are vital. In India you often have to deal with people and need to be a business, man…  not just any businessman.

The third panel gave an overview of the Indian M&A landscape, taking lessons from past merger waves, also giving an overview of some recent deals — and in particular of Swiss Banking group, Julius Baer’s recent acquisition of DSP Merrill Lynch’s wealth management and related businesses in India.

4. Jugaad, or Make the Indian Way

Not many people deal better with chaos than Indians. Often in India, the choice is not between order and chaos; but between manageable chaos and unmanageable chaos. We drive in cities where drivers do not understand the concept of traffic lanes or the importance of adhering to traffic rules; we somehow survived our complex coalition democracy for 30-years; we deal with our bureaucratic civic and social institutions and pluralistic issues patiently; and more importantly we find ways to compromise, innovate and thrive in the midst of chaos. There is perhaps, fewer better ways of social preparedness to be innovative (jugaad) and develop an entrepreneurial mindset.

Frugal and India specific innovation is increasingly being adopted as a managerial technique to lower costs and cement ties with an ever-increasing consumer base. Lufthansa — An Indian heart?  Wolfgang Will, Director India & South Asia, Lufthansa Group, speaking of Lufthansa’s strategy in India says that for the first time the group came out with a country specific advertisement for India in its global network, which has paid off with rich dividends.

Why should you attend the India Symposium?

The India symposium is an annual management and leadership conference, bringing forth the best people from banking, corporate and public sector from India and Europe; and of course a great place for young professionals to network and learn about upcoming trends in India.  As sponsored students, we were welcomed by the  Chairman of the India symposium committee, Dr. Sigu Muringaseril, who introduced us to the different panelists.

Lucky us — the venue for the 10th symposium was the majestic Dolder Grand resort, a nice break from the city-centred resort of yesteryear.

The panelists were approachable and encouraged active participation from the audience. Networking — In-between panels we got an opportunity to have one-on-one sessions with some of India’s top financial executives. In 2012 I had co-authored a report on Indian Legal Risk Ratings (dealing with wholesale financial and corporate law and transactions, in collaboration with a ‘Magic Circle’ UK law firm) and it was personally satisfying to see some of the policy recmmendations our report deliberated upon to make India an attractive investment destination: like labor reforms and raising FDI caps are being implemented by the Modi Government. About time!!

Symposiums isn’t  just about being nerds. We enjoyed our time — indulged in fine Swiss delicacies at the symposium,  painting Zurich red thereafter with other student delegates and an alumnus of the organizing committee, finally  ending our night rather late partying hard — whoever said, bankers can’t have fun ..

India, is not in a beauty contest with China !!   India is different and developing at a different time. There is no revolutionary technology giving ‘Make in India’ an immediate boost and every policy has a lag effect, but India can catch up with China. Investment in human capital is equally important, specially the untapped potential of women in the labor force, who could power Swagatam Bharatam (Make in India). I sign off optimistic about the India story and I quote Shri. Aashish Kamat (CEO UBS India), “… for an investor being in India .. it is akin to running a marathon… you have got to be long for the long term”.  Adam Smith, please make a note!

Check your smartphones for further updates on the India story, while the roar of the Lion gathers momentum — as it soars together with the Eagle.