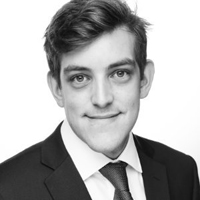 Hampus Falck
MIB class of 2018
Hampus is a student from our masters of International Business. Born and raised Sweden, he has grasped a high level of internationality with experience tanging from China to the United States. After graduation from Frankfurt School he is aiming to make a career within the consulting world.

Early on Sunday the 18th of September, the Masters of International Business intake of 2015 embarked on a 3-day trip to the Belgian city of Leuven with the purpose of completing a series of leadership and team-building workshops. During their stay, the class was also welcomed at the European Commission in order to attend several seminars in relation to the theme of their visit. Below, two members of the group recount their experiences:

Multiple activities took place during the visit to Belgium, all focused on leadership, cooperation and teamwork. Home after the visit at the European Commission, we all had a quick lunch at the hostel to continue our team building activities. The class was divided up to 3 teams, all with building materials and supplies such as nails, steel wire, lumber and hammers, each team held different types of materials. The mission for the teams was to build a catapult with the tools each team had, it was allowed to trade but not a must. The teams all showed enthusiasm during the process of building the catapult which was ranked out of the criteria; how far it could shoot a golf ball, how sturdy the catapult was and how much material that was used. Each team shoots the catapult with various successes. The teams presented their catapult to the judges who also observed the earlier catapult shots. The judges came up with a result not long time after; it was a split decision which left all teams somewhat disappointed because every team wanted to win.

Early on Monday morning we headed to the European Quarters in Brussels to attend the Visitors’ Centre of the European Commission (EC). A short introduction to the history of the EC was followed by a seminar on the role of the Commission as the executive of the European Union. The presenter, Mr. Simon Pascoe, shared some interesting insights regarding the different areas in which the Commission operates, and the intricacy of the sovereignty issue that arises when trying to accomplish supranational objectives. The seminar concluded with a Q&A session with the students in which the presenter’s dodging of any Brexit related question raised the skepticism of many members of the group. After a quick coffee break we were greeted by Mr. Stefan Tostmann, Head of Unit Performance at the Directorate-general Human Resources department. Mr. Tostmann, a Hamburg native, touched upon the several ways in which the European Commission deals with its different nationalities and intercultural relations. This last part of our visit covered an interesting range of topics, from intercultural relations in a work environment to the role that integration plays in the 5 Presidents’ Report.

Leuven is a city not far from the capital Brussels, the city can be associated with the beer brand Stella Artois. The city has many train connections to the capital and the station is located well in the city. A short walk brings you to the old areas of the city which host a rich variety of bars (which may be linked to the fact that Leuven hosts the biggest University in Belgium) as well as shops selling local, handm
ade chocolate. The Leuven town hall is a must see when walking in the city, old architecture makes it stand out in the cities old town. When visiting Leuven, do not forget to buy the fries sold on the streets or in food trucks.

Our time in Belgium was a pleasant experience. It was very refreshing to reunite with our classmates in a non-formal environment after the summer break. Important concepts and principles of intercultural environments were reinforced in our visit to the European Commission. Yet, the EC´s incapacity to successfully calm some of the students’ concerns regarding recent European events left many of us with a sour taste of the visit.

On the other hand,  the team building and leadership activities allowed us to become more proficient when working in those intercultural environments.

Angel Moreno Conejo
Angel and Hampus students from our masters of International Business. Born and raised Sweden and Spain respectively, they have grasped a high level of internationality with experience tanging from China to the United States. Both students will soon graduate from Frankfurt School of Finance and Management and are aiming to make a career within the consulting world.
Contact: https://de.linkedin.com/in/angelmorenoconejo