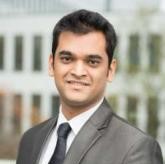 Digitalization is a stepping stone towards forth industrial revolution. Different stakeholders including companies across the world have implemented or are in the phase of implementing digitalization strategies to take their business to the next level. Similarly, governments across the world especially in Africa and Asia have already taken necessary steps in the direction of digital financial inclusion and are leading the way.

On November 29, 2018 Frankfurt School of Finance and Management organized a panel discussion to explore this question in depth. Three panelists – Mr. Christian Hecker, Business Manager to the Head of Retail Bank, ING Diba, Mr. Manoj Kumar Sinha, VP State Bank of India, Mr. Anirudh Agarwal, International Advisory Services joined the panel and was moderated by Dr. Barbara Drexler, Associate Dean, Frankfurt School. The event was co-hosted by Society for International Development and Consulate General of India, Frankfurt. This article will briefly throw light on the main topic of the discussion: how India has taken a gigantic leap towards full digital financial inclusion.

As of November 2018, there are about two billion people who lack access to banking services and are vulnerable loan sharks and accounted for unexpected risks.  The transaction costs of providing traditional banking are expensive. However, a key technological driver to financially include people in the system is digitalization. Multiple stakeholders have to act to make digital financial inclusion a successful strategy, both public and private.

Governments have to play an important role by providing a framework where private companies can be innovative to implement solutions and financial services. For instance, in July 2016, Government of India (GoI) launched Digital India campaign to formally include its marginalized people in the economy. Since the launch of this campaign, India has included more than 300 million people into the formal banking system. These numbers when they start banking transactions would greatly increase liquidity in the market.

The effective, secure and legal of the digital transformation across the country of this size, the most important step is the digitalization of Know Your Customer (KYC). In 2009, GoI had launched its Unique Identification scheme called AADHAAR to collect the data of its citizens along with fingerprints and retina scan. Since then, AADHAAR (means foundation) has created unique identities for 1.12 billion citizens. 33% (the population of USA) of these AADHAAR accounts are linked to their mobile numbers and bank accounts. Aadhaar is now used by many financial services provider – public or private as a tool to KYC reducing the time and efforts taken by the service providers. This has enabled in not only faster delivery of services but also has increased the outreach to low-income consumers. The main challenge before this for GoI was to provide the “last mile delivery service”. Now, any citizen can open a bank account within minutes using a mobile phone whereas the same procedure in Germany can take several days.

The main challenge for any government across the world is driving adoption of these services by masses especially for the population at the bottom of the pyramid. India has managed to put up a state of art digital services infrastructure in a very short time span, better than many developed countries, but the main challenge lies in driving adoption of these services for the ones at the bottom of the pyramid, elderly citizens and women. The second challenge lies in driving adoption of the financial services provider. Moreover, GoI has introduced many services and campaigns to drive financial inclusion but it has been very difficult for the citizens to keep abreast with all of them.

After the great discussion, I can personally conclude that India is moving forward and is getting closer to its target of achieving financial inclusion for 1 billion citizens and has set a great example for many other developing countries.